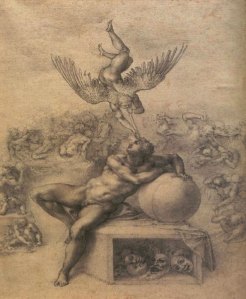 On Friday May 28, 2010, the Department of English at Royal Holloway, University of London, hosted a one-day seminar on the topic of “Shakespeare’s Philosophy.” The Backdoor Broadcasting Company has just made streaming audio of that event available online (including not just the presentations, but responses and discussions sessions as well). To access the recordings, please click here.

Here is a brief description of the aims of the seminar:

The aim of the seminar is to provide a forum in which to debate the validity and value of treating Shakespeare as a philosopher or his plays as forms of philosophical thought, and of bringing philosophical perspectives, past or present, to bear on his plays and poetry.

And here are the paper titles and their abstracts:

My paper will offer some introductory reflections on the key questions we were invited to consider. It will begin by looking at plays where Shakespeare‟s characters seem to be thinking philosophically, and where the work as a whole appears to imply a philosophical stance. It will conclude by considering the ways in which Shakespeare’s plays resist comprehension in philosophical terms, forging their more elusive visions ― what Chesterton called their ‘thoughtless wisdom’ ― in the crucible of form and phrasing.

Professor John Joughin – Shakespeare and Philosophy: or what is the “Thing” Shakespeare?

Possible Worlds’ explores Lear, and in particular Edgar, as a site of possibility, through the lens of Leibniz’s monadology and Agamben’s potentiality.

The project of reducing Shakespeare to a philosopher seems to me to join the prevailing thematic ways of reading, all of which tend to bypass critical questions concerning Shakespeare’s theatre. A more adventurous criticism might set out to replace approaches derived from other disciplines with a serious attempt to analyse the pleasures of fiction.

Professor Richard Wilson – The Hideous Rashness: Shakespeare and the decision

Shakespeare’s plots turn on the tension between justice and positive law that became a focus for postmodern philosophy thanks to Derrida’s readings of Weimar thinkers Carl Schmitt and Walter Benjamin. For in play after play he stages the same perception as Montaigne, that ‘Laws are now maintained not because they are just, but because they are laws. It is the mystical foundation of their authority’. This lecture will therefore reflect on Shakespeare’s representation of the question confronted by these theorists of the state of emergency: “How to distinguish between the force of law of a legitimate power and the originary violence that must have established this authority and that could not have authorized itself by any anterior legitimacy?‟ (Derrida, ‘The Force of Law’). The presentation will finally consider how this ‘ordeal of undecidability’ squares with the current impatience with deferral and with the ‘rashness’ of recent Shakespeare criticism.

I begin with Luther‟s preference for theology over philosophy because it „gets at the meat of the nut, the kernel of the corn, or the marrow of the bones‟ and go on to show how Measure for Measure unfolds a demonic theology of desire that indeed does get into the anguished and ecstatic embodiment of human being.